No, beta 8 is not set in Antarctica, although it is midwinter here in Australia. 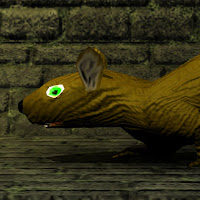 For the last month I have been working on making the UI feel better when used only with the mouse. I usually play with WASD but I've forced myself to play with only the mouse to get a feel for what it's like and fix any quirks. If' you've tried using the mouse previously, have a feel of it now and tell me if I've missed anything. There are lots of little things - from how chests open, to single-item pickups, attacking, etc.

By popular demand, you can now edit your stats during character creation. The range of possible stats had to change to make this reasonable: previously a wider range was possible, just very unlikely, now it's more constrained for each class. The effect of CHA on commerce has been amplified a bit - so be careful choosing big muscles over a good personality. Personally, I still think it's more fun to play a random roll.

Mostly for the last month I have been working on something else for WazHack. Sorry, I don't mean to be mysterious, I just hate vaporware announcements. I do want to assure you that yes, I'm still very much alive and hacking, and to let you all try out the feel of mouse-only play.

In devising a fun title screen, I thought of how what you see in this release is just the tip of the iceberg of what I have been working on. As usual, I got carried away having fun expressing that. I liked the iceberg texture so much that I changed how the Cold wand/spell works: it now freezes the target in ice. Hitting a frozen creature either shatters and kills them (a favourite trope of mine) or does nothing (except critical hits - these work as normal); the chance of shattering is unrelated to the creature's current HP but rather to their max HP (i.e. to their hit dice and hence level). Their armour shatters with them, but other items are dropped (assuming they didn't freeze and shatter when you first zapped them).