Initially, only the Web version is available. You can play it now at: http://beta.wazhack.com/play 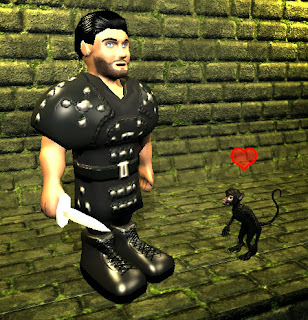 This release adds 8 new classes - finally your favourite Roguelike actually has a Rogue class! Click the big yellow arrow on the character selection.

Each new class has brought a new major feature or upgrade to existing features, all of which are relevant to all classes. So while the Bard starts with a Lute, any character could find one (though they are rare of course). The Rogue and Thief similarly use Stealth, which is now much more relevant to how monsters notice you, regardless of what class you are playing. I'll leave you to discover the value of the other classes yourself.

Talents now must be upgraded together more - no more just going straight to level 3 on a single talent. This is to keep balance while allowing talents to be significantly more powerful at levels 2 and 3.

In the Guild Hall you'll find the new Achievements list - a good way to keep track of your deepest journey or for veterans to find a harder challenge or two.

There are also a few more items, and a few new monsters and changes, far too numerous and spoiling to list here.

I'm only one person so there will be bugs. I'm still nursing a broken arm, but I'll try to fix them as fast as you can report them. The best way to report bugs is via the in-game menu option (it sends a copy of your game for me to analyze). If the problem is more abstract or gameplay related, by all means start a discussion here, or on the Reddit Forum.

Thanks for helping, I hope you enjoy playing the new classes as much as I enjoyed making them!

It generated so many hits on the site that it exceeded the daily quote I had set on my Google account. Serves me right for penny-pinching - I imagined the only way it would exceed 45GB was if there was a bug.
Posted by Waz at 1:18 PM 1 comment: 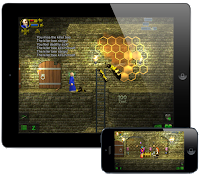 After 6 months of development and an intense beta, WazHack 1.1 is now available for Windows, MacOSX and Android. The new content is a free update to the 1.0 version.

New to WazHack? It's the game where time freezes while you don't move. When you move, enemies move... or perhaps you will use time to quaff a potion, zap a wand, or cast a spell. This time freezing mechanics is reminiscent of Dragon Age or even Braid, but in fact it derives from the original Rogue turn based mechanic.

WazHack is a roguelike in the same tradition as NetHack or DCSS, but with a whole new 3D visual presentation like none other. You still get "turn based" action, but now a "turn" is a fraction of a second. By removing player reaction time as a concern, you're free to contemplate the vast array of possible items you have in your inventory when faced with a difficult situation, while still being free to hack and slash through a band of weakling kobolds and watch their ragdoll-physics reptilian corpses crumple to the ground.

There are now over 300 different items in the game, and the new items go quite well with some of the new dungeon features. For example, you may find a small room with a closed door... before you knock on the door it might be a good idea to drop some of your gems and see if they are actually gas bombs, so you can weaken the horde of monsters as they come out of the room.

The new dungeon branch plays homage to NetHack's "Gnomish Mines". In WazHack, the mine has gnomes, but it also has a mine shaft with an elevator, and some other more deadly industrial advances await you. A pick-axe may come in handy too.

That's enough spoilers! Get playing and discover it for yourself! http://www.wazhack.com

A new build of WazHack 1.1 beta3 is online, and this time it includes the Android APK! 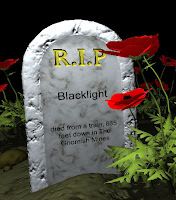 Thanks to all the great feedback I got on the Web version, I expect this will only need a very short beta period, unless problems show up on specific Android devices. I now have 3 wildly different devices that I test on, and all 3 look great. With all the performance improvements in this release, I've been able to add support for MSAA (anti-aliasing) on Android - looks are works great on my Samsung Galaxy Nexus.

If you haven't played the 1.1 beta yet, now is the time to get on board. Just be more careful about it that Blacklight here...
Posted by Waz at 7:37 PM 2 comments:


WazHack 1.1 is now in BETA! Initially, only the Web version is available. You can play it at: http://beta.wazhack.com

This release adds a new dungeon branch, the Gnomish Mines. It's significantly larger and more complex than the Fort Ludios branch, and found at around 500 feet on the left side of the dungeon. I won't say more to spoil anything.

There are new dungeon features for you to discover - some people have said that the dungeon walls get a bit monotonous and while I completely agree, I didn't want to add purely decorative stuff to improve that. The new stuff is not purely decorative, so watch out!

There are quite a few more items, and a few new monsters, mainly specific to the new branch. Some monsters' strengths and weaknesses have been tweaked a little, but hopefully they will still be familiar for current players. Many items and spells have been tweaked too, so try new things (eg. apples now keep the doctor away).

There are a few more talents, but now each class has a specific subset of 8 available... no more Dweomery for Knights, sorry, have some Courage instead. This is partly to avoid feeling like you play every character the same way. There is also a pseudo-talent called "Nightmare Mode", in case you get bored.

People who would like to play "Big Picture" can enjoy the new controller support - you should be able to play the entire game pretty smoothly with an XBox360 controller or similar. This support will also be available on Android.

There are a lot of bug fixes too, and minor UI changes like faster healing (still uses as much food though, and now your stomach is smaller) and better keyboard navigation.

This version will also be officially supported on MacOSX, so feel free to send bug reports of problems with the Web version on that platform.

When the game is tested enough in the Web version, there will be a BETA period for the standalone Windows, MacOSX, and Android versions to iron out any platform- or device-specific issues. At release, there will also be an iOS version (this is only being tested privately, as public off-market testing is too hard on iOS).

The iOS port included a lot of optimization work behind the scenes. Part of this was developing a better delayed-loading and recycling system for assets, meaning I can add a lot more to the game later without blowing out memory usage on any platform.

This version is also the first to use the new Unity 4 engine, which will mean some pros and cons, but ultimately allow me to keep moving the game forward.

I'm only one person so, as always, there will be bugs. I'll try to fix them as fast as you can report them (that's the advantage of the web version - I can update in minutes instead of hours and days like the other publications). The best way to report bugs is via the in-game menu option (it sends a copy of your game for me to analyze). If the problem is more abstract or game-play related, by all means raise it for discussion here.

Thanks for helping, I hope you enjoy playing it as much as I enjoyed making it!