The new release is up on wazhack.com!

There are two major additions. The first is obvious from the title screen (but there are also more advanced ones to be found. Clue: don't sell your best gem...). 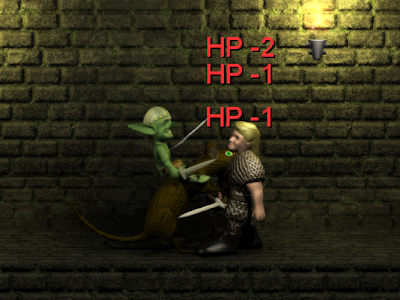 The second new feature is mounted creatures - like a goblin riding a giant rat! There are only two mounted creatures this release, just to test it out, but I'll be adding more, including the ability for the player to ride mounts. Not much point riding a rothé, since they can't climb ladders, but don't worry, I have some ideas....

A few things have been rebalanced in this release: wands of polymorph have a shorter range and usually less charges; the dual wielded talent is also toned down a little (see the new percentages).

No more spoilers - go play! Remember to reload if you have played recently: check that you get the beta 6 title screen.

Some changes were added to the live beta5 version that I'll particularly mention: pet inventory management is now much easier: they will not pick up anything, and will not drop anything you give them until they are burdened. They'll also use weapon and armour (previously they usually just dropped them), assuming your pet is a creature that can use them.

Blessed identify scrolls will never identify everything when playing co-op multiplayer, so don't bother with trading loads of stuff back and forth.
Posted by Waz at 10:44 AM